Once upon a time, a little family went out to buy a new hamster. They were missing their now deceased pet so much, that a replacement had to be found. They returned from their ‘safari,’some hours later with –  a Border Collie –  which was of course way too big for the vacant hamster cage (and no, they didn’t try him for size!). Everyone was thrilled to have the dog home (for a trial period), except  mum who was extremely apprehensive and even a little afraid. Now Brig, for that was his name, was discovered languishing in kennels, looking rather thin and thoroughly miserable.  He had been earmarked, from birth, for competitions and trials but had been sadly ‘overtrained’. Consequently, he was timid – but he was black and white and beautiful. Before the family reached home the children had already made a list of essential supplies, planned where he would have his bed, best food, fashion and grooming accessories and exercise rota – trial period my eye!!! There would be no going back.

At first Brig growled at men wearing denim, ‘shrank’ from the look and sound of a rolled up newspaper and bristled at the rattle of cutlery. I would say this spoke volumes about the quality of his ‘training’, wouldn’t you? Happily, he soon settled in his new home and became yet another spoilt member of the family! And what about mum? Did the apprehension vanish?  Did the ‘fear’ evaporate? Well, not quite. If there were other family members around she was fine but on the rare occasion she found herself alone with the loving creature, she was not at all relaxed. To her great fear and alarm, the dog would come and sit as close to her as possible. Where she went in the house, Brig followed. She could feel him watching her but she could not bring herself to look directly at him. Why??? The truth is – she was terrified that the dog would….. would… speak to her!! What?? Oh it’s true. She had a real terror that this could happen. Oh, how ridiculous, how irrational, how downright stupid was she! Did you know her? Em… well yes I did….I mean I do … it was me. What?? Oh I think you should explain your idiotic self…….

Well…. here goes. My maternal grandmother (whom I never knew) had five children – John, Con, Jane, Sarah (my mother),and Peter. She also had two dogs, one of which was a big, splendid Irish Setter called Billy. One dark winter’s night, as Grannie sat ( if only her name had been Fannie) by gaslight, staring into the dying embers of the fire, she heard a footfall on the outside staircase. ‘I wonder who that can be,’ she mused aloud to herself. ‘It’s John!’ said Billy the dog in a big, gruff voice ….. and guess what? It WAS John. The End.

Off to bed we were sent. There was no plenary session where questions could be asked or details clarified. I mean what happened to the dog?Did it stand for Parliament? Did it join a circus? Did ‘Grannie and Billy’ headline at The Motherwell Empire?I can’t speak for my sisters but I was too shit- scared to talk!(It didn’t help any that the Wolf and Red Riding Hood had a full blown conversation either!) Consequently, I had this ‘phobia’ about dogs. I tried to avoid them at all costs and if this was not always possible then at least I attempted not to ask any questions when they were in the vicinity!

Time, of course, is a great healer and I became more and more comfortable around them thanks to family and friends. Joe’s first dog, Warner (a Hungarian Puli) was an absolute showstopper, Pauline’s Carlo (a King Charles Spaniel) so cute and endearing – both dogs sadly no longer with us (never ever thought I’d ‘mourn’ an animal’s passing) – but I get it, I do: they get right under your skin and into your heart. At the moment we have ‘Boo’ Higgins (Anne Marie’s and family’s) who is a right spoiled, beautiful little Bichon Frise and encouraging news about a new member Finn (Golden Labrador) for ‘The Team’ up in Argyll. I have friends who have/had one dog (Sheila, Ali, Lyndsay), two, (Bobby) and even three doggies (you know who you are, Kathleen!) with wonderful ‘tails’ of each. So let me shout from the ‘wooftops’ –  thank you all for being a part of my ‘rehabilitation’ programme…………… you’ve certainly worked some ‘Animal Magic’ with me…… Now I wonder who that is at the door ….. Boo?…… 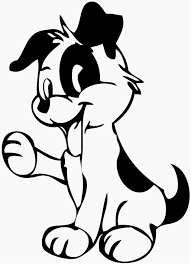 Did you hear about the agnostic, dyslexic insomniac? He was awake all night wondering if there really was a dog.

Did you hear about the zoo which had no animals in it except for a dog?  It was a shih tzu.

A white horse walks into a bar ‘Wow,’ exclaims the barman,’we’ve got a whisky named after you!’       ‘Whit, Humphrey??’ says the horse……(Yes, yes I know this has nothing to do with dogs but I have it from the white horse’s mouth that the barman’s name was Billy.)