We loved being by the water, you and I,

whether it was by a river, a lake or an ocean and I do think that we would eventually have found the ideal spot and the courage to ‘up sticks’ and go there. When you were ill I had a dream about seeing you sitting quietly gazing out to sea as the sun was setting. I couldn’t see your face clearly for I seemed to be behind you but I awoke with the distinct feeling that it was you.

We were a pair. Neither of us could swim although I did at least try………but we had to acknowledge that we were  both pretty terrified of taking the plunge. Isn’t it strange then that when Pauline and I went to Majorca two months after your death I had this real sense of seeing you swimming towards me………

We were taking a sail around the north of the island. The boat had stopped to allow those who wished, to have a dip in the Mediterranean. I took up my place with the other spectators by the ship’s rail to watch these brave, brown water sprites. Some distance away a beautiful schooner was sitting at anchor. 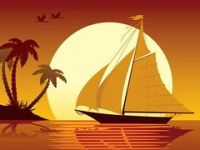 I was in awe of its colour, for, unlike the rest of the sleek, white craft which adorned the sparkling aquamarine sea, this appeared to be a wooden vessel of a rich dark mahogany, with billows of tan coloured sails……….. ‘Stately Spanish galleon coming from the Isthmus , Dipping through the Tropics by the palm green shores’…. ……….I wondered what it was like to be  a part of that world , the world of the ‘other half’ and as I mused I imagined I saw you dive off the deck into the water. You broke the surface, glistening and laughing as you swam towards me ……. God ……….where did that thought come from.? ……….. but the thought persisted and replayed itself over and over again. I tried to see myself dive into the water and swim out to meet you but even my fevered imagination knew that would have taken a courage I didn’t possess. Where did your courage come from, Hugh, to do what I thought you did….? My enduring memory of that trip is of how happy and liberated you seemed to be………now where did that thought come from……….God? We did the same sail the day before we left for home but our splendid schooner was nowhere on the horizon……..

Anne had been surfing the ‘net’ for last minute deals to tempt me out from under the big grey clouds both meteorological and psychological.

‘ Mum, this is too great a bargain to miss. You and Pauline  really should go.’

Anne could be so persuasive. I really didn’t care one way or another. The idea of going away on a holiday without Hugh was just unthinkable. I urged Pauline to go. I wanted her to get a break from me.

‘Pauline wont go anywhere without you, Mum. But she would love to go to Majorca………with you. Just think, this time next week you could be soaking up all that sunshine. You’ll need the sunshine to get you through the winter.’…………….

Hugh always took care of things. He would do anything except pack his case………that was my department. Currency, tickets, passports, maps – they were all there at his bedside days before our departure date. A plentiful supply of hearing aid batteries, film for the camera and a new notebook for my daily account of our ‘ holiday adventures’ were all purchased well in advance. I loved the idea of going off on holiday but actually leaving home filled me with dread. Consequently ‘Packing Day’,which was always the day before we set out, was fraught with tension. Some weeks beforehand I would  wash and shop and stockpile ‘essential’ items. As the weeks progressed ‘essential’ items would have to be pared down into a stockpile of ‘really essential’ items and by the time the suitcases were retrieved from the loft and my memory refreshed as to their ultimate capacity, the stockpile had shrunk to ‘absolute essentials’. Now, we do have a travel iron which should have ruled out the need to iron before packing. But no, if our cases were to to be searched or were to burst open at any given point en route to our destination then the public at large would be dumbstruck and flabbergasted at the pristine condition of our travelling wardrobe. Not only did these exacting standards apply to the holiday gear but rooms had to be tidied,

cushions plumped and cleaner deposited down toilets in the event that any wayward fellow intent on burglary and choosing our little nest to help him feather his own, would gasp in amazement at the ordered surroundings and depart instantly leaving only a note saying, ‘Hope I didn’t disturb anything  – only came for a kitchen sink but I guess you’ve taken it with you.’

No wonder Hugh rolled his eyes heavenwards in mock despair. He had stopped trying long ago to understand it all. It was just a day that had to be ‘got through’. He knew that once the cases were finally snapped shut, the last cushion tweaked and the front door tried for the umpteenth time, I was, at last, good and ready to head for the hills.

‘Wouldn’t it be great, Hugh,’ I would muse, ‘ just to go off into the wild blue yonder and not have to worry about what to take and what to leave behind…..just to…..go !’

And that day was the first day of June, Hugh, when you slipped quietly away with nothing of your own and everything of mine…………

Currency, tickets, passports, maps. I set  them out as Hugh would have done. Thomas retrieved the luggage from the loft. ‘Just the one case, Thomas,’I advised unnecessarily. The children were excited for us as was  Anne who had been tireless in her efforts to get our holiday gear organised within the week. I looked at their faces. How I wished they were coming  too……..and Joe ………..God, I feel as though I’m abandoning them……..I should be here for them…………how could you do it, Catherine…………how could you leave him at such a time………..how can I leave them now………..I can’t do this………………Pauline? I looked at Pauline with a silent pleading. Her eyes met mine with a strength that said ,‘I know I’m not dad but I’ll look after you. We’ll be fine…..you’ll see…’

And so, on the day before our departure I found myself staring blankly into the emptiness that was my suitcase. Snippets and snapshots of  holidays we had spent together raced through my head like a film on fast forward. Yet it seemed to me that within no time at all the task was done. I wasn’t exactly sure what I had packed. I only knew for certain that my heart wasn’t in it. 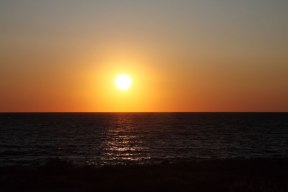