As a child I knew for certain that it was Christmas when the red crepe paper was put around the light shade in the hall and the soft red tone bathed everyone in a warm, mysterious glow. The ‘real’ tree, packed into its decorated coal bucket was adorned with an assortment of cotton wool snowmen, silver bells fashioned from milk bottle tops and yards of coloured gummed circles linked

to form a chain and wound around the fragrant little tree from top to bottom. Daddy’s empty matchboxes and cigarette packets, wrapped like little presents, dangled from the ends of branches while homespun ‘crackers’ sat  comfortably atop their needly bed. 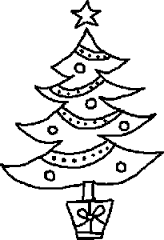 The crowning glory – a glued and glittery cardboard star, lashed to the topmost branch, completed the presentation. Could ever any child have been happier.

Letters to Santa Claus were written and put up the newly swept chimney as daddy reassured us that Santa was indeed a wizard. We would gaze into the fire and see myriad of surreal ‘pictures’ made by the smouldering coals and the dancing flames. Unaccustomed  shadows of magnified snowmen and crackers and chains and needly branches flickered across the walls and ceiling, changing the room into a breathtaking, slightly scary place. Daddy would sing, ‘How far is’t to Bethlehem…’ and the only songs I ever heard my mother sing, ‘O Santa Claus’ and ‘Far Away in Fairyland’ all held a promise of a time of wonder still to come.

There was never a problem getting us off to bed. You see Daddy always seemed to meet Santa when he was on nightshift at his ‘big work’ and would keep him up to speed on our good behaviour. Obviously Santa used tons of Colville’s steel up in Greenland for train sets and cars and bikes for boys…….things he never had to deliver to our house. Our hopes were for dolls and prams, pencils, crayons and colouring books, plasticine and jigsaws, storybooks and sweetshops, a pencil case, a paintbox, a teddy, a tea-set………..a surprise……………

Sometimes there were great surprises. I have a memory of brown stockings filled to overflowing as I peeked out through the drawn curtains of the ‘set-in’ bed. The dying embers flickered and highlighted three, or was it four, lumpy limbs hanging precariously from the tall wooden mantelpiece. Santa really was a wizard and I was scared out of my wits. I kept my eyes tightly closed until daylight. I should never have peeked. I was told not to….or else! (‘There will be no Santa Claus!’) Is this the experience that made me fear the dark? It certainly didn’t spoil the sheer delight of emptying my stocking the next morning. If I close my eyes I can still smell the new

pencils, the wax crayons,the pristine storybooks, the new doll, the

tangerine…………if only I could remember more…….there was the pillow slip that Mrs Craigie hung  up for me in her house…….. imagine Santa knowing that I was her special girl too. Santa seemed to know that Martha was Mrs Robertson’s special girl . Mrs Craigie, Mrs Robertson, ….that was quite a building. Do you know, I think I could name every family who lived there…. and there were at least eighteen.

I think I was about eight when we moved to a brand new timber house with a garden, three bedrooms, a kitchen, a living room and (joy of joys!) an inside toilet. My parents must have been so excited. And me? I remember standing staring over the new fence  at the next new garden where  a new boy was standing staring back at me.

‘What’s your name ?’ he eventually blurted out.

‘Baldy Bane’, I whispered to myself as I ran indoors to find a familiar face.

When people talk of community spirit I think of the occupants of that tenement building in Windmillhill Street which was my first home. Sadly those people and that building are no longer there……

‘Mum are you there?…….You were miles away ! I think we need a wee coffee and a scone and I’ll show you what I got for my tree. I got something for you as well…. you are putting up your tree…..aren’t you?’

As we made our way to the coffee shop, little  buried sadnesses exhumed themselves to interrupt my consideration of Anne’s question. Feelings of Christmases past, feelings of utter dejection and disappointment, of no filled stocking, of magic as dead as the ashes in the cold fireplace.

‘Oh, you’re too big for Santa now!’ they said and Santa, being the wizard that he was, must have thought so too.

Too big for Santa, too big to sit on daddy’s knee, too big to cry. So you learned not to cry, not to fuss, not to draw attention to yourself when others were around. I didn’t want to be ‘a big baby!’ – psychology used by adults to halt the wretched tears but sometimes they couldn’t be stemmed by mild rebuke or scornful teasing. It would then be, ‘Stop that or else!’ ………..sob…..sob…..sob….I’ve started so I’ll finish………..

‘Did you hear me? Stop that right now or I’ll give you something to cry for!’

How can you hold back a tidal wave ? I remember what it was like trying to do just that and the wracking sobs and sighs that took their own time to subside. I would disappear to the dubious privacy of the bathroom (there was no lock on the door) and stay there just as long as other family members would allow.When I cried it must have been obvious for at least two days.(Joseph would rightly have compared my red blotchy and swollen face to that of  ‘a burst couch’.)

‘Have you seen the state of that face! That’s what comes of feeling sorry for yourself. Your eyes are like two burnt holes in a blanket..!…….wait till I tell your teacher what a temper you’ve got. Now, I need a loaf and two pints of milk, so, get your coat on and get that face straightened and be back here  before your father gets in from his work…..and don’t bother asking……there’ll be no penny caramel!’

Skinned knees and elbows and hands used to be ‘kissed better’ but I must have got too big for that too……..

(‘You should have been looking where you were going !’..

‘What did you expect if you were running…?’!)

Still there was a hint of sympathy for injuries you could see but for hurtful, anxious, worrying, invisible wounds there was little medicine.

Self help started at an early age . I talked to myself a lot and I was a good listener. So I became my own counsellor and decided (probably while on a milk run), to accept the fact that crying only seemed to make everyone else angry (my fault ) and that I should listen to and follow my own advice whenever humanly possible (it kind of fitted in at that time with my fervent desire to be a martyr and  thus a Saint !)

Better not cry too much then …. ..best not to cry at all ……besides…… I couldn’t cry like  Doris Day…

Martha , in her early teens, had a ‘calling’ to the convent.

‘What would you like first, Hen?’ mum would inquire sarcastically.

‘Listen you to me, there are quicker ways to get a job on the buses……now, there’s your piece…….. out you go.’

Martha accepted this response over and over again without question and I presumed that this was an explanation she already understood . She didn’t – and it wasn’t until many years  later that all was made clear.

Apparently a local girl , having been encouraged in her vocation by family and clergy, was swept into the convent on a wave of love and prayers only to discover, after a short stay that she wanted to ‘change her habits’. Within weeks she was to be found as a fully fledged bus conductress

complete with uniform, hat, money bag and ticket machine. Contemplative prayers and Plain Chant were replaced with, ‘Fares,please !’ ‘One at a time!’‘Move up the bus !’ ‘Ah’m full up !’ ‘Upstairs only !’ and the ambiguous ‘C’m’oan ge’ aff !’

This was all my mother needed to help set her mind against Martha’s noble but misguided calling to the Religious Life……. ‘There will be no nuns in this family’!

I never thought to ask Martha if she regretted not having explored her calling further. Somehow I think she just fancied the ‘costume’…..or was it Peter Finch in ‘The Nun’s Story’ ? We’ll never know.

Sometimes I feel that I’m moving through the days without ‘touching the sides’. I fret about having to do things but then  I seem to arrive at a point where things are done. I am reminded of the text of ‘Footprints’ and honestly believe  that He must be carrying me a lot of the time. It is then that I am calmer and more trusting. This is the place I want to be. But doubts and fears and self pity continue to churn up wave after wave of despair and I panic at the rising tides that threaten to overwhelm me. What is this journey upon which I am embarked alone? This was never in my plans or dreams. What happened to ‘…..and they lived happily ever after…..’ ?

It is almost midnight. I gaze incredulously at my handiwork. It is beautiful. Sparkling and twinkling in the corner of the room, it exudes the season .

Deep greens, rich reds and glorious golds are intertwined and arrayed in the sumptuous presentation that is my ultimate Christmas tree. Wow! I could sit here forever…..The strange thing is……..I don’t remember doing it…….Oh I know I must have done it…..but how ?…….I do remember dragging the bare tree  from the garage, retrieving the boxes and bags of baubles and beads but I don’t  recall the effort of it all. It had been the last thing  on my mind when eventually Anne brought me home.

I smile weakly at her persistence as the car reverses out of the driveway. I wait by the door as I always do, to wave her down the Crescent. Suddenly the car comes crunching back up to the door.

‘Mum, you forgot your pressie !’

A little bag comes flying through the air in my direction.

I go into the empty house.

‘I’m  home, Hugh,’ I whisper and sink heavily into his chair. It is that time of day. The grey blue light of the approaching dusk begins to wash over the room. School would soon be out, the soup would be simmering in the pot….time to turn on the lamps and…………..oh God, I have to stop this. As I move to get out of the chair the little bag drops out of my lap. I bend to pick it up and find a little paper robin winking at me with its little  jewel of an  eye……