It is now Friday……already! Last week, at this time, I was packing(and unpacking….. should I take?…..will I need?…..) a bag to go up to ‘The Strath’ (Strathlachlan, Loch Fyne) to see ‘my boys'(and Jas of course!). Sounds straightforward – well not if you’re me.

My heating had broken down the day before and the engineer diagnosed a fault in the boiler. A new !@$%&* was needed and it had to be ‘sent for’…… could be Monday…..sorry…….. 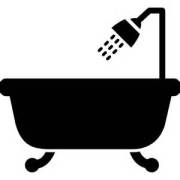 I couldn’t use my own shower on the morning of my departure. I had therefore to make use of the facilities in the bathroom. ‘So what?’ I hear you say (I’ll ignore the fact that you used ‘SO’!) ‘Lucky you having a choice’……Yes, yes, yes, spare me the lecture…… ! I am not looking for sympathy here but I do have a route and a routine which I follow every morning when the body rises AND IT DOES NOT INCLUDE CLIMBING OVER A BATH! This new activity required serious planning.The following points had to be addressed:Can one lift one’s leg high enough to scale the side of the bath? Well I tried it (undress rehearsal) and had no difficulty…. but memo to self – remember to remove  the trainers……..

Does the surface of the bath require a non slip mat? Eh, yes, since I won’t be wearing the  trainers…..

Is one able to maintain one’s balance with one leg still on the floor? This is possible    but….memo to self – go to the toilet beforehand ……!

Has one gathered all that one needs to shower before the dragging of the other leg into the bath? Done…shower gel, buff puff, shampoo, conditioner,  but…. memo to        self….do not arrange around the edge of bath as you need to get a grip.…

Are the towels within easy reach? Hopefully, unless they, too, fall in along with everything  else…. including me….

Has The Good Fairy been alerted? Yes, she has been given a timetable and will be standing by with lilo and oxygen mask……

The ‘Fosbury Flop’ into the bath was not as problematic as I feared but what I hadn’t anticipated was the force of the spray from the shower head which caused me to ‘back away’ in alarm upsetting the paraphernalia arranged behind me which I’d then to retrieve before the surface of the bath was turned into a sliding rink..!..phew!… I wrestled with the shower head to reduce the flow of water but there was this one rogue jet which would not be tamed…… it ‘spewed’ in my eye throughout the whole soapy palaver. I decided to throw in the towel but found it had already beaten me to it …… drat and double drat! I ran through the flat to my room with a damp towel stuck to my person  singing, through chattering teeth, ‘Dear Lord and Father of Mankind forgive our foolish ways and (there now follows some improvisation)….I do hope the window cleaner’s having a ‘sickie’ if not he’s having a paloorie’…………. I was not a happy bunny. Undaunted, I proceeded with the rest of my toilette and began assembling the bare necessities for my long weekend…….. in out, in out, shake it all about ….. ugh, how I LOATHE PACKING!!!!……. or is it just the thought of leaving home.?…. Christopher Columbus – you’re only going for a long weekend – a long relaxing weekend……CALM DOWN! BREATHE! CHILL.!…well the latter isn’t a problem as it’s f…f…f..freezing in here! Thank goodness I’m going away !…… and there you go – a silver lining!…..

Packing done. Double check essentials: tablets, reading glasses, mobile, purse, tooth (don’t ask!)…… and there’s time to spare…..now let me see…..what can I do before Joe and boys arrive? What about doing NOTHING!…..Errr…no.

I’ve been meaning to clean out that toaster for ages…(?!.)..Business- like I go into the kitchen, unplug the toaster, remove the little crumb tray and turn the toaster upside down to shake out the stubborn, incinerated debris. Woah! The whole crumby shower spills over onto the floor…..aaaaah! I scoop up what I can from the worktop, tiptoe through the crunchy floor and open the cupboard to make a deposit  into the little bin. I miss the target. I grab a cloth to clear the bottom of the cupboard but to do this properly I get down on my knees….. (now what else can I do when I’m down here..?.), realise I’m wearing my coat and shrug it off. Eventually, I struggle to my feet. I wait a few seconds to allow the blood flow to normalise before heading to the hall cupboard for the dustpan and brush. My foot catches in the fabric of the discarded coat and I find myself ‘tripping the light fantastic’ towards the end of the hall. FFFFFireman FFFFFFred and the KKKKicking KKKKing!!!! How on earth did I manage to keep upright? I think I would still be displaying my fast and furious footwork if my front door had been open – mercifully it was not and so the nifty routine came to an abrupt halt as it and I made sudden contact! I retrieved the coat and hung it up. I was singing by this time…….’I’ve got a luverly buncha coconuts…….’ Taking the dustpan and brush I went back to the kitchen to clean up the floor. Now if I told you that I missed the target of the bin again, you’d say I was exaggerating, wouldn’t you? Well….. allow me to exaggerate….. oh crumbs!

My sojourn in Argyll was just what I needed. I took loads of pictures on my ‘HUDL’ but as yet don’t know how to get them onto my blog …. but it’ll happen.

I’ve had tea and scones at The Castle, listened to a brilliant omnibus of ‘The Archers’ at Grannie’s (with a delicious breakfast thrown in!), had a beautiful pheasant dinner at ‘Bumper’s'( great company!), coffee and cake at ‘The Treehouse Cafe’, Cairndow (under Jas’ management) and I have walked Jas’ boots off!! There were new lambs born while I was there, Highland calves to be admired but more than that  – my family to be enjoyed. Love you, Joe, Jas, Isaac, Dylan – and Finn(woof!) x